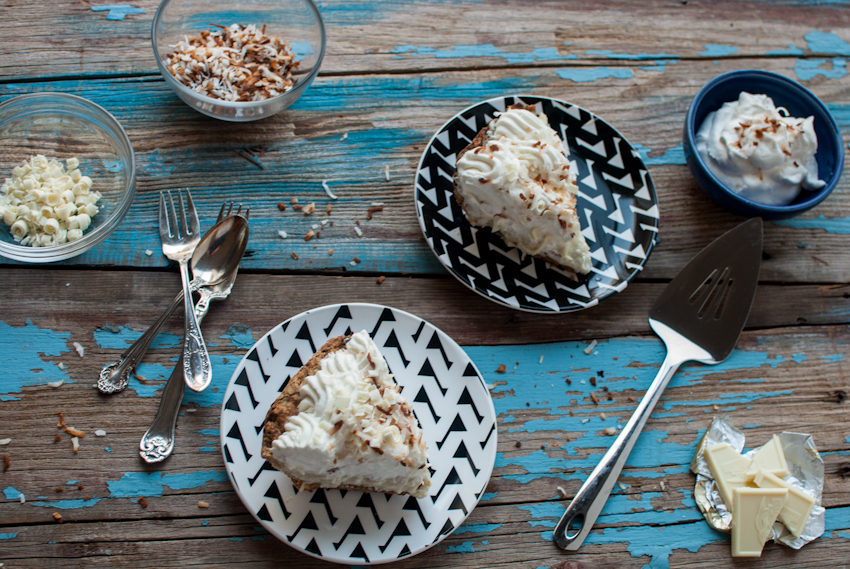 Ok, so it’s National Pie Day, mathematically speaking anyway…but as foodies we celebrate with “real Pie”. Coconut Cream Pie…it’s the total comfort food of pie world and this is the pie that put Tom Douglas on the map! Last year I got the chance to meet him and have him sign his cookbook… he asked me what was going to be my first thing to bake out of his Dahlia Bakery book, of course I said the Coconut Cream Pie!

If you ever visit Seattle, you must make a stop at Dahlia Bakery. They bake amazing deliciousness! And no, you don’t need to buy a whole pie to try the coconut cream pie, they sell mini individual bites and keep the case stocked of these at all times! My other favorite they bake in the Fall is the pumpkin whoopie pie….helloooo Fall in a treat! So what makes this coconut cream pie stand out from all the others? It’s the rich creamy custard and white chocolate with toasted coconut. All filled in a coconut pastry crust and topped with a mountain of whipping cream! And the crust, we must talk about this coconut pastry crust. Flaky and buttery with a hint of coconut, it’s strong enough to hold up to all this creamy filling without becoming soggy. It’s THE best pie crust!  Yes, that’s it, the best coconut pie in this world.  It is also the pie that saved Tom’s first restaurant from closing……

Yes, it’s true…a pie actually did that! In 1989 he opened the Dahlia Lounge, another awesome restaurant btw, and were on the verge of closing the doors. His staff went from 42 down to 20, then one day they made this pie and offered it on the menu. The pie was such a hit, people called the restaurant to ask if it was on the menu before stopping by! They worked there way up from 1 pie a day in 1989 to now more than 100 served every day at their many restaurants in Seattle. They have even served this pie four times to president Barack Obama! The rest of this story is in the Dahlia Bakery Cookbook, I think you need to buy this book to add to your cookbook collection :) Now if I get the chance to meet Tom again, I will tell him I “rocked the Coco pie” as he signed in my cookbook, yes I think Tom would approve :)